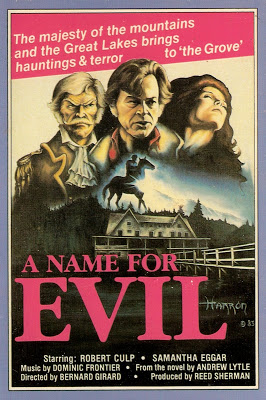 A Name For Evil is a film I must have seen late at night during one of the brief periods where I had access to cable television. I know it had to be on cable because I never saw the movie in a video store.

It’s a quirky, one of a kind movie about a successful architect who lives in New York with his beautiful wife (played by Samantha Eggar), but experiences eerie nightmares that draw him to an ancestral mansion in West Virginia.

He manages to convince his hesitant wife to go with him, and finds the mansion in a state of disrepair, but feels unusually familiar with the place.

What I want to write about is not the movie, which you can easily find for yourself, but the opening sequence, which consists of a group of drawings reminiscent of Gustave Dore or Hiernymous Bosch which depict various states of mental illness.

What I find interesting about this is the age-old confusion between mental illness and evil.

In the movie the character played by Robert Culp isn’t portrayed as evil in particular, but he does seem to be dealing with some form of mental illness, either temporary or ongoing, we don’t know as we didn’t know him before the movie begins.

The movie only receives a rating of 3.8 at IMDB, so no one is claiming it is a cinematic masterpiece, but there are some vividly eerie and haunting scenes in the movie and the overall atmosphere is worth watching it for in itself. I’m not sure the movie really addresses either the issue of evil or mental illness in any significant way, but it does strike a nerve in me when I watch it.

I’m not even sure the scenes where Culp heeds the sirens song and plunges into the lush woods only to discover a “church” where the services are more orgiastic than spiritual in any way have any deeper meaning, but they are filmed in a dizzy and reeling dreamlike manner that continues to keep me coming back to the movie hoping for more.

But there really isn’t any more. You leave A Name For Evil with exactly what you came to it with. You can see more of my reviews of long-forgotten and low-budget horror movies at Zombielogic’s Incredibly Brief Movie Reviews.