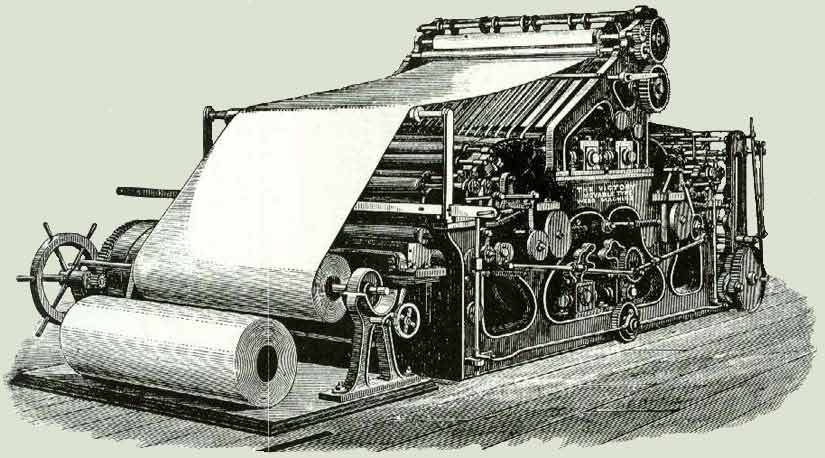 The technique was invented in Germany in the first half of the fifteenth century, being inspired by the method used by jewelry artisans. The precision and finesse of the lines obtained, made the intaglio technique to be introduced to manufacture banknotes, starting from the eighteenth century as follows: 1772 – Germany, 1810 – USA 1841 – Austria, 1866 – Russia, 1890 – Sweden.

Up until the nineteenth century printing processes – including those used for the production of bills – were predominantly artisanal, using semi-industrial processes and only the discoveries of the early twentieth century made possible their industrialization. Regarding in depth printing (intaglio), first patented printing systems are dating from 1860 (France) and allowed web-fed printing processes on both sides-  a process called rotogravure – whereas the first sheet fed, in depth machines were built in 1913 in Germany. The first such printing press, was made in 1913, by the Schnellpressenfabrik Frankenthal Albert & Cie.

Until the mid-twentieth century the intaglio printing of banknotes has been made only in one color. In 1947, Gualtiero Giora designed and built the first intaglio printing machine that allowed printing three or more colors, simultaneously. The machine was based on the previous inventions of the engineers Orloff and Beaune. Giora Gualtiero is regarded as the “father” of banknotes production, as it is currently, for his inventions revolutionized the banknotes printing industry.

So far, we have seen that the intaglio printing, rotogravure, in depth printing or whatever you would like to call it, is closely related to the one thing that sets the world in motion, money. But let us find out what makes this technique so special and for that we should look at the characteristics of the intaglio printing technology in money making: the thickness of the ink layer deposited on the substrate may be up to 100 times bigger than the one applied using the offset method; areas are printed in relief; colors are more vivid.

Using the same printing plate, multiple inks can be submitted on the same banknote and an item on the same banknote can be printed in multiple colors, limited not necessarily parallel to the direction of the paper advancing into the machine. Engravings made on the printing plate may have different depths and thicknesses, and a variable height and thickness line of the printed items. The accurate reproduction of minute details and contrasts, allows conveying human face expression.

But what other nice surprises hide behind the rotogravure process? This method of printing being the fastest, is able to print starting from labels to rolls up to several meters wide. Considering the high color transfer capability, this type of printing is often the ideal choice for high quality printing or photographic reproductions. Rotogravure printing is used for high-volume projects like magazines with more than 1 million copies, or mail forwarding catalogs.

If you are looking for equipment for rotogravure printing, whether used or new feel free to check out http://usedpresses.org/used-rotogravure-printing-machines/.  And there are quite some reasons to do so among which: high start-up costs and the rather expensive new rotogravure presses and spare parts that certainly favour the used rotogravure presses.
Post Views: 171

2 thoughts on “Rotogravure – a short history”