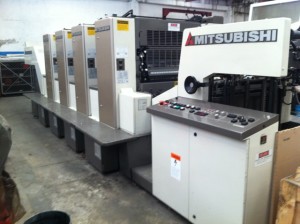 What do you think you know about Mitsubishi? Did you know that besides the cars they are producing, they also make electric pen sharpeners, mobile phones till, ships and planes?

For example, Mitsubishi printing machines  is a very rare known branch of the Mitsubishi Group and you probably had no idea they are producing printers too.

They also produce offset presses with and advanced technology that combines almost a century of corporate experience and the newest developments in this field of industry. Mitsubishi printers meet the standard expectations of any printing business around the globe, offering high quality products, mostly for commercial purposes.

Mitsubishi Motors has a long history of more than 100 years. It was founded in 1870 by a young Japanese, Yatar? Iwasaki, who wanted to start a business on his own. It didn’t take long and the company started to grow and extend the activities into other areas too, like ships engineering, heavy industry, oil and steel production, chemical industry, electronics etc.

In 1917 it was founded the first automobile production line in Japan along with the Mitsubishi Model A and short after, in 1928 they have extended with the founding of the aircraft company. They even started to produce buses in 1932, the Fuso B-46 being the opening model.

Today Mitsubishi exists in 170 countries of the world and 30 in Europe, from Island, to Turkey and Russia. It has arrived in Europe in 1974 along with the Lancer’s start up and it is in a continuous development since. The Mitsubishi Lancer is one of the most sold cars in the world.

The base in the motorsport has been granted by the Mitsubishi 500 Super Deluxe in 1962 after winning the first Macau race with 4 of their cars in front. Recently, Mitsubishi developed their newest aeroplane for local transportation of passengers, applying the technology and the engineering know-how used for their famous high-speed trains.

Very few know about Mitsubishi mobile phones. About 15 years ago, Mitsubishi launched a phone model called Mitsubishi Trium. The owners of this model admit that their 15 years old phones are still functional in the present.

Mitsubishi Electric, part of Mitsubishi Group, announced a few years ago that they will give up on the mobile phone business and they did because it brought them more losses than earnings. The company tried to set the limit for
Japanese market only but there was, unfortunately, no more options for big sales.

The company’s logo was designed by Iwasaki and he used the logo of his family which contained 3 diamonds and the logo of the Tosa clan represented by 3 united oak’s leafs. After this, in 1875 Iwasaki named the company Mitsubishi, which means “Three diamonds”. Since that all the expanded companies in the group had the same name.

The logo in the final form has been registered in 1914 and it still stands proud today among the greatest names of corporate giants around the world.